They were using this panacea for many pathologies (gastrointestinal, gynecological, rheumatic, venereal, dermatologic, paralysis, fevers, colds, tuberculosis, etc.), for food, for fishing and hunting items, for protection, for magic….

Materia Medica. A few years ago, in France, I have heard a talk from Professor Morelle (the father of the synthesis and use of lipoamino acids in cosmetics) who was jumping on the floor screaming in his microphone that Nettle is the most powerful medicinal and antioxidant plant in Europe. He was then 95 years old and he died a few months later – perhaps from over-enthusiastic praise of the Nettle, on another stage.

According to Dr. Christopher: «Stinging nettle is an astringent, diuretic, tonic, anodyne, pectoral, rubefacient, styptic, anthelmintic, nutritive, alterative, hemetic, anti-rheumatic, anti-allergenic, anti-lithic/lithotriptic, haemostatic, stimulant, decongestant, herpatic, febrifuge, kidney depurative/nephritic, galactagogue, hypoglycemic, expectorant, anti-spasmodic, and anti-histamine… Nettle leaf is among the most valuable herbal remedies.  Because of its many nutrients, stinging nettle is traditionally used as a spring tonic.  It is a slow-acting nutritive herb that gently cleanses the body of metabolic wastes.  It is one of the safest alteratives, especially in the treatment of chronic disorders that require long-term treatment.  It has a gentle, stimulating effect on the lymphatic system, enhancing the excretion of wastes through the kidneys».

According to Dr. Christopher again: «Numerous studies conducted mostly in Germany have shown the root to have a beneficial effect on enlarged prostate glands.  There have been several clinical trials that have demonstrated the efficacy of stinging nettle in treating benign prostatic hyperplasia (BPH) stages I and II.  A combination of nettle root and saw palmetto berries was found to be equal to the generic prescription drug finasteride, without side effects. These studies suggest that the root extract may inhibit interaction between a growth factor and its receptor in the prostate».

According to James A.  Duke, one of the fathers of Eclectic Medicine, in his book “Green Pharmacy”: «The recommended beneficial dose of boron is 2-3 milligrams daily.  An analysis of stinging nettle provided to me by the USDA scientists shows that it contains 47 parts per million of the mineral boron, figured on a dry-weight basis.  That means that a 100-gram serving of stinging nettle, prepared by steaming several ounces of young, tender leaves, could easily contain more than the 2-3 milligram recommendations.  According to the Rheumatoid Disease Foundation, boron is effective because it plays a role in helping bones retain calcium.  It also has a beneficial influence on the body’s endocrine (hormonal) system, and hormones play a role in helping the body maintain healthy bones and joints».

Recent researches. A plethora of scientific investigations have been realized concerning the medicinal properties of Nettle. Some of them are listed in the monograph published on Nettle by The Alternative Medicine Review.

In May 2017, a study was released about the protective effect of ethanolic extract of Urtica urens against the toxicity of Imidacloprid on bone remodeling in rats and antioxidant activities. Let us recall that Imidacloprid is one of the most dangerous agricultural poisons made by Bayer, one of the main actors of the criminal agro-petro-chemical Mafia.

In April 2017, a study was released proving that extracts of Urtica dioica inhibits proliferation and promotes apootosis in the case of breast cancers.

Another recent study was published proving that Urtica dioica attenuates ovalbumin-induced inflammation and lipid peroxidation of the lung tissues in case of rat asthma.

Rob McCaleb (the founder and president of the Herb Research Foundation in Boulder, CO) wrote, in 1998: «In an open randomized study, singing nettle given in combination with a sub-therapeutic dose of an anti-inflammatory drug was as effective as a full dose of the drug alone for arthritis pain relief.  Forty patients experiencing acute arthritis took part in the study, with half taking the full 200 mg standard dose of the prescription drug diclofenac.  The other subjects took 50 mg of diclofenac along with 50 g of stewed nettle leaf.  All subjects ate the same foods during the study and only those with uncomplicated medical histories were included, based on very specific criteria.  Researchers used both objective and subjective tests to measure effectiveness.  The results were impressive: a combination of 50 g nettle leaf with one-quarter of the normal dose of diclofenac was just as effective in relieving pain as the full dose of the drug alone.  The authors noted ‘50 mg diclofenac is unlikely to produce such a profound effect.’ Previous research has shown that doses of 75 mg diclofenac are inadequate for arthritis pain relief».

In 2013, a study was published highlighting the effects of Urtica dioica in the case of allergic rhinitis. «In a double-blind placebo-controlled randomized study of 98 patients with allergic rhinitis the effect of a freeze-dried preparation of Urtica dioica was compared against placebo.  Based on daily symptom diaries and the global response recorded at the follow-up visit after one week of therapy, U.  dioica was rated higher than placebo in relieving symptoms». 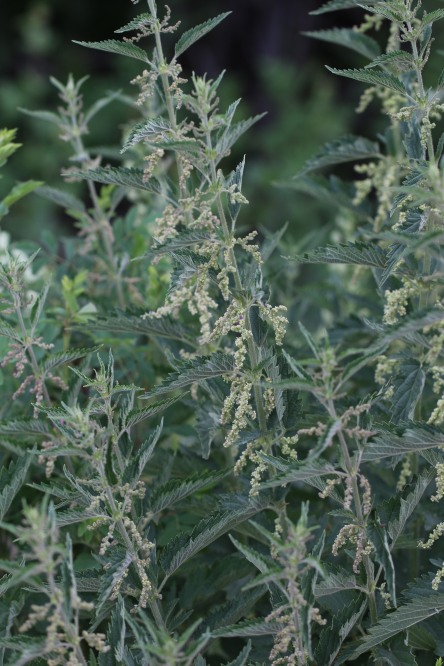